A Long Journey to Closed Doors: By Shraddha Joshi, 2016 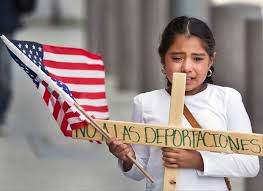 “Life, liberty, and pursuit of happiness.” The basic rights that every American deserves. Citizens all across the country take these privileges for granted, and few have ever taken the time to envision what life would be without them. It’s the “American Dream,” right? However, just south of this nation, in Central America, the situation is different. With oppressive gangs and pervading violence dominating the region, children in Guatemala, Honduras, and El Salvador struggle to even see their next day. Due to the devastating plight and human rights violations being endured by young individuals in Central America, as well as the strong urge for asylum allocation by supranational organizations such as the United Nations, unaccompanied child migrants from the aforementioned regions should be granted refugee status by the United States, as opposed to deportation.

The definition of a refugee, as per the Geneva Convention, applies directly to the situation of Central American youth, who are fleeing their nations due to the presence of humanitarian threats and oppression. Article I of the Geneva Convention defines the term “refugee” as an individual who, “owing to a well-founded fear of being persecuted for reasons of race, religion, nationality, membership of a particular social group or political opinion, is outside the country of his nationality, and is unable to, or owing to such fear, is unwilling to avail himself of the protection of that country” (“Convention Relating to the Status of Refugees”). Although persecution is traditionally attributed to race, gender, ethnicity, or religion, one can see that membership, an aspect which is often overlooked, is also an idea mentioned in the convention. Membership is extremely important in Central America’s Northern Triangle (Guatemala, El Salvador, and Honduras), and can make all the difference between life and death for a Central American teen. For example, seventeen year-old Kevin from Honduras received the following advice from his grandmother: “If you don’t join, the gang will shoot you. If you do join, the rival gang will shoot you—or the cops will shoot you. But if you leave, no one will shoot you” (“Children on the Run”). In other words, not being a member of a certain gang is just as dangerous, if not more, than being affiliated to one. The majority of Central American children who flee to the United States are merely attempting to live their lives. The fact that they are being targeted and persecuted is an idea which aligns with the reason for the “well-founded fear” mentioned in the Geneva Convention. Another concept highlighted in this international document is the idea that the governments of affected nations are unable to aid the fleeing people, or the civilians do not feel protected under their respective law-enforcement powers. The governments of the Northern Triangle nations rank extremely high on Transparency International’s Corruption Perceptions Index 2015. The most corrupt of three nations, Guatemala, ranks as the 123rd most corrupt nation in the world, while the “cleanest,” El Salvador, ranks as the 72nd most corrupt (“Corruption Perceptions Index 2015”). In addition, these corrupt governments, which are stricken by instability and lack of development, are often controlled by gangs and cartels. They are unable to protect their people, who, in turn, are forced to flee. Thus, one can see that the second essential point shown in the definition of a refugee in the Geneva Convention is illustrated through the plight of Central American child migrants, since governments in such areas cannot support their people. Consequently, through the reasons outlined above, unaccompanied Central American child migrants clearly fall under the category of refugees, according to the Geneva Convention, an international document which is the basis for the definition of the term “refugee” all across the world.

Not only does the situation of unaccompanied Central American child migrants fall under the official refugee parameters and criterion outlined in the Geneva Convention, but the acceptance of these children as refugees is also a United Nations suggestion. Since 2014, the United Nations High Commissioner for Refugees (UNHCR) has been pressing for an international agreement or resolution which considers Central American child migrants as refugees in the United States. The United Nations recognizes that although the passing of such a resolution would not result in legal action, it strongly urges both Mexico, and especially, the United States, to recognize the graveness of the situation and provide asylum to these children. The UNHCR describes the situation in the Northern Triangle and neighboring nations as armed conflict and persecution. Fernando Protti, a United Nations aid worker refers to the crisis in the following way: “They are leaving for some reason. Let’s not send them back in a mechanical way, but rather evaluate the reasons they left their country” (“UN: Central Americans Fleeing”). According to a UN report, over 58% of child migrants who were interviewed after journeying from the Northern Triangle and Mexico were in need of international protection. This means that they were being persecuted for a reason within the Geneva Convention definition, and their government was unwilling or unable to aid them. Specifically, 72% of Salvadoran child migrants required international aid, as well as 38% and 57% of Guatemalan and Honduran migrants, respectively (“Children on the Run”). Although some American legislators and politicians, mainly from the Democratic Party, support the idea of refugee status, there is also a large prevalence of individuals who advocate for deportation and oppose asylum allocation. Nearly all of the rhetoric against the granting of refugee status for Central American child migrants is presented by the supporters, officials, and House members of the Republican Party. Much of the American right, especially the more radical portion of the party, considers these struggling children as illegal immigrants or economic migrants who should be deported and forcefully sent back to their respective countries despite their desperate situations. In fact, as per a Public Research Institute, 40% of Republicans who responded supported immediate deportation (Brody). This, according to the wealth of evidence presented above, can be seen as nothing short of ignorance, seeing as the majority of child migrants are fleeing a serious humanitarian threat which is recognized by international organizations and published interviews and studies, as worthy of aid. As far as the federal government of the United States, the White House has requested a grant of four billion dollars in order to combat the humanitarian crisis. However, no relevant action has been taken so far, and suffering children are continually apprehended each day by officials and guards along the country’s Southern border. Thus, through the evidence and information presented, one can conclude that the plight of asylum-seeking Central American child migrants is so grave that international bodies, such as the United Nations High Commissioner for Refugees, are pushing the United States to grant refugee status to these children.

To any rational individual, the plight being faced by Central American child migrants is so pressing of a humanitarian crisis, that it cannot be in any way ignored. Each day, children and young people are being threatened by gangs. These threats go much further than verbal abuses; children are kidnapped, murdered, raped, and tortured- all of which have become the norm. A quote by 15 year-old Maritza, who fled from her home country, uncovers an unsettling truth: “In El Salvador, they take young girls, rape them, and throw them in plastic bags. [I was threatened] on April 3rd and I left on April 8th. They said if I was still there on April 8th they would grab me…” (“Children on the Run”). This unnerving idea is in no way uncommon for Central American girls. Children in such areas are afraid to leave the house to interact with their friends, and even go to school, for fear of being raped, murdered, and assaulted. However, as innocent children from such areas struggle to come to the United States to simply survive, they are promptly dubbed with the title of “illegal immigrants”, are accused of stealing American jobs and healthcare, and are hastily sent back to their turmoil-ridden conflict zones. Is this what justice means? Indeed, not. If the unimaginable human rights violations being faced by Central American children were prevalent in the United States, they would be condemned heavily and the consequences would be extremely severe. However, when these problems are faced by those from another country, the United States shuts its doors and tightens its locks. One extremely important idea to consider is the fact that parents in the Northern Triangle and such nations are risking a spectrum of dangers to send their children, young and old, alone, in order to create a better life. These desperate parents wish to send their children away to a foreign land, with risks of being trafficked and sold on the way, as anything is better than their current situation. What are they searching for? The child migrants in question are not even in the position to strive for the basic human rights of “life, liberty, and pursuit of happiness”. Rather, they are wishing simply for something which the average, well-to-do American has never fought for: sheer survival. These children are pleading for the basic right to live without being sold, raped, tortured, kidnapped, and murdered, and should thus be given asylum by the American government.

Across Central American nations, child migrants are leaving the region rapidly in pursuit of a better life free of violence and fear. They are being separated from their families and the ones they love, for the hopes of survival. By analyzing the Geneva Convention definition of the word “refugee”, one can conclude that Central American unaccompanied child migrants are, in every way, displaced persons who are enduring an agonizing humanitarian crisis. Furthermore, the pervasive oppression and suffering present in these areas, and the United Nations request, both support the extremely valid argument that America must consider Central American child migrants as refugees, and give them the asylum that they deserve. After all, when these children strive to come to this “Land of Opportunity”, all they wish for is their right to see their next day without pain and suffering, and no one, in his or her good conscience, can take this right away.