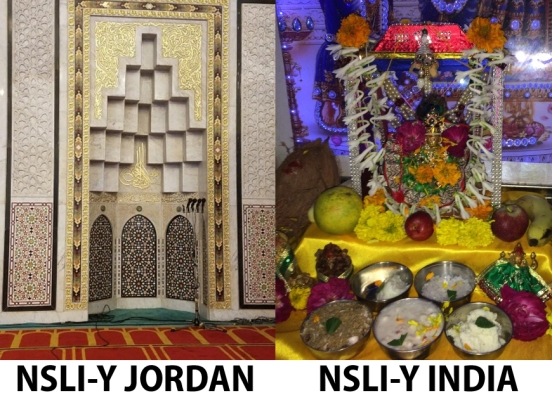 These past months, after returning from Jordan, I have been avidly following a lot of the NSLI-Y year program blogs, especially of the students who are studying Hindi and spending the year in Indore, a city in Central India. Reading their experiences has really made me think, and I have realized that I am getting to see a part of Indian culture that I never experienced myself: the religion and the abundance of religious festivities.

Coming from a nontraditional Indian family, I have grown up practicing meditation, and my upbringing has been more spiritual than religious. As a result, I haven’t been exposed to temple visits and family rituals, which might be a staple of other Indian households. However, while reading the NSLI-Y Indore blogs, I was intrigued by the the many religious traditions that I have only heard of or seen in movies. As it seems, the girls who are currently studying in India visit the temple often with their host families, and actively participate in a myriad of festivals and elaborate rituals. As Megan described, “During pooja, or prayer, my family cleans the gods and dresses them in beautiful dresses.” Alice, another student on the program talked about fasting with the women in her family: “At four in the morning, I woke up for our pre-fast meal of gulab jamun and rabri (Indian rice pudding). Sindhi women, fasting for marital bliss, can [decide] to drink chai or water throughout the day. However, food cannot be eaten until moonrise.”

Shifting gears to my own experience in Jordan, I feel like many have the perception that religion is the strongest part of the society. When the Middle East comes to mind, the first thing that most of us think of is religion, and the all-pervading prevalence of it in the area. My experience told me otherwise. Indeed, the presence of religion was quite abundant in the language, with various phrases that include the word “Allah”, meaning “God”. In fact, I soon learnt that unlike in the United States, there is no such thing as “saying God’s name in vain”. In the Arabic language, there are a range of phrases that come in pairs; a phrase that involves wishing health, wealth, or happiness upon others is often responded to with a similar phrase with the word “God” in it. For example, when acknowledging someone’s hard work, there is a phrase (y3tik al3fiye) that can loosely translate to “May He give you health”, to which the response (Allah y3afik) is “May God give you health as well.” The words with “Allah” in them, such as “Inshallah” (God willing), “Alhamdulillah” (thanks to God), Mashallah (used to express praise) are so essential to communication that people can’t do without them. My mind always goes back to one of our last Arabic classes wherein our teacher, Ustadha Entesar, was consoling us and telling us we would come back to Jordan someday. “No ‘Inshallah’; I’m serious,” she told us. “You will come back to Jordan for sure– Inshallah.” It was impossible for her to say the sentence without “Inshallah”, lest she’d jinx the future.

As far as actual religious practices however, it seemed as if everyone’s prayers were very personal. My host parents would pray on their own at different times, and while they did pray five times a day, I only witnessed it a handful of times. In addition, prior to arriving in Amman, I had imagined that the city would freeze whenever the “Adhan” (call to prayer) came on. However, as I soon learned, the only perceivable change was that people in cars would turn down their music, only to begin blaring it right after it finished. Otherwise, despite the fact that the melody filled the entire city, work, life, and conversations went on as usual. My experiences with religion in Jordan were limited to what I could see and hear, and the topic was rarely discussed with my host family. When we were curious to know more about religious practices, it was always our teachers at Qasid whom we would question, asking them about the different prayers and customs, and what they meant to them personally.

What strikes me as interesting in all of this is that one would think that in a country like Jordan, which, given its regional location and state religion (Islam), would be thought to have a larger emphasis on religion than India, a secular state. However, from the perspective of foreigner steeped in the culture, I found that religious practices were very personal, and varied from individual to individual. Of course, part of this may have been due to the fact that we were not there during Eid, one of the most important Muslim holidays, but speaking from a general standpoint, the most “religious” thing we did as students was to visit a mosque, that too for the purpose of general sightseeing. In India, however, from what I have seen from the lens of NSLI-Y students, they are very much a part of religious practices, and participate very regularly with their families. It would be interesting to see how the presence of religion varies for NSLI-Y students in other countries.